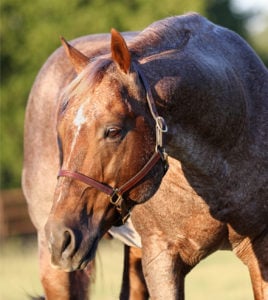 In a dizzying ascent to the top of the National Reined Cow Horse Association’s sire earnings list, Metallic Cat now sits at Number One. The red roan stallion’s offspring has cut, reined and gone down the fence to the tune of more than $4,250,000*.

Owned by Bobby Patton’s Rocking P Ranch, based in Patton’s hometown of Weatherford, Texas, the 2005 stallion by High Brow Cat and out of Chers Shadow (by Peptoboonsmal) supported reined cow horse before becoming the presenting sponsor of the NRCHA Snaffle Bit Futurity® in 2019, the year he also was named the NRCHA Sire of the Year. With this newest accolade, Metallic Cat continues to add to a résumé that began when the stallion was showing in the dirt at the Will Rogers Coliseum earning multiple National Cutting Horse Association titles.

Bred by the Roan Rangers and shown by Beau Galyean for then-owners Alvin and Becky Fults’ Fults Ranch, the stallion never lost a cow in the cutting pen and amassed more than $637,000 in lifetime earnings.

“We are just thrilled he reached this milestone in such a short time,” said Alvin Fults. “That was always a goal of ours when we started breeding with Metallic Cat to the cow horse industry breeders. The sky is the limit where he goes; there are lots of offspring showing and will be for many more years. Congratulations to Bobby Patton for all he’s done to keep promoting Metallic Cat.”

Patton acquired the stallion in 2015 a year after he had purchased Spots Hot, a cutting horse stallion that he said showed him what the breeding business was like.

“I could see an immediate return on investment in the breeding year following buying ‘Spot.’ That gave me a taste of stallion ownership and an understanding of the business,” said Patton. “When I got Metallic Cat, I wanted to do something different to market him. I have to give Debbie [Roberts] credit because she thought it would be a good idea to branch Metallic Cat out to reined cow horses and that led to our involvement in the NRCHA. It made sense to me. At that time, I didn’t have an appreciation of [cow horse] but I got educated and gained perspective on the industry.”

Follow all the latest happenings on our news page