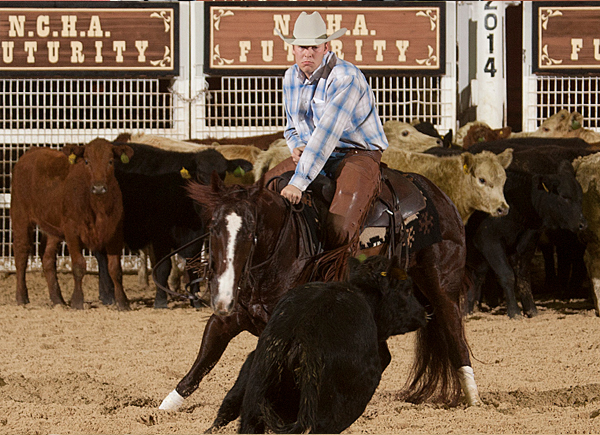 “I knew we had a good horse,” said Hanson, who showed Metallic Mandy, by Metallic Cat, for John and Hope Mitchell, Weatherford, Tex. “She’d been good through the go-rounds and was good in the Non-Pro.

“She’s very consistent, has a big stop, and is really smart about a cow. She’s there for you every day and nothing ever changes with her.”

Going into Thursday’s second day of Non-Pro second go-round competition, Hope Mitchell, reserve champion of the 2008 NCHA Non-Pro Futurity aboard Lannies Freckles, is the leader with 433.5 points on Ms April Cat, by Cat N A Hat, and also a second go-round contender on Metallic Mandy.

Hanson also came close to another 220-point run in the John Deere Finals on Little Too Sly, but lost his relentless second cow, with no time for a third cut. Even so, he was awarded 205 points.
“I knew on (Little Too Sly) that I could have a good run,” said Hanson. “We had a good first cow and spent a lot of time getting our second cow set up and cut right. That cow was good for a bit, but then it just wouldn’t turn away.

“She’s a real good cowhorse. She tries hard every time and will fight them off.”

Gabe Reynolds, who drew first to work in the second set of the John Deere Finals, used Chris Hanson’s ride on Metallic Mandy in the first set, as his template.

“I watched the first group of cows and those guys tried to cut what they thought were the best,” said Reynolds, who showed Metallic Moon, by Metallic Cat, for Sandy and Jeremy Patton, Washington, Ohio. “They were mostly gray cows and they didn’t prosper from them. So I decided we were going to keep it simple and cut some black cows, because that’s what Chris cut. And it worked out really well.”

Metallic Moon, trained by Cody Frye, was purchased by the Pattons a year ago, after Reynolds and Sandy Patton watched Frye work the mare on several cows.

“She was just so broke,” said Reynolds. “Everything (Frye) did, she was just so soft and smooth. It was a no-brainer. I thought, this is going to fit what we want. We are really lucky to have her.”