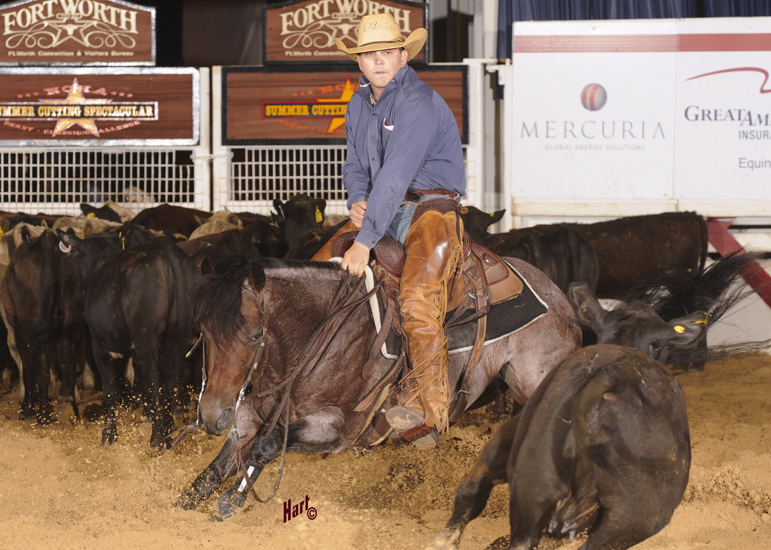 It was a big win in more ways than one, for Cody Hedlund and Meteles Cat on Monday night, in the Non-Pro division of the inaugural Western Bloodstock NCHA Showdown in Cowtown. The 227-point score was Hedlund’s highest earned in a limited age event, and the winner’s purse of $35,000 hit a home run out of Will Rogers Coliseum.

“That’s a huge check with a huge number on it,” said Hedlund, who collected $16,417 for his Non-Pro win in the 2015 Breeders Invitational. “This (Showdown in Cowtown) is going to be a big deal and I hope they continue it.”

The Showdown in Cowtown was a concept suggested to NCHA by Western Bloodstock Ltd.’s Jeremy Barwick, an innovator in cutting horse marketing and sales.

Six-year-old Lil Rattler, by Dual Rey out of 2005 NCHA Futurity champion Highbrow Supercat, also surpassed all of her previous non-pro earnings with her Showdown cache of $22,000. The lifetime earner of nearly $260,000, Lil Rattler’s biggest previous share of a purse came as fourth-placed open finalist in the 2013 NCHA Super Stakes, under Wesley Galyean.

“I was getting kind of nervous and I don’t usually get too nervous,” said Cody Hedlund, who drew last to work in the 12-horse field of the Non-Pro Showdown in Cowtown finals, where Feiner and Lil Rattler drew next-to-last. “With Steven having that run right before me, I wanted to make sure I had an aggressive run and they (judges) knew I was here.

“My help did an awesome job of keeping me calm and finding my cows.”

Meteles Cat was bred and trained by Hedlund’s father, Rock, who qualified for this week’s NCHA Derby Open Semi-Finals with 434 points on Twice As Smoothe. Meteles Cat is also a half-brother, out of Teles Lies, to Teles Bout This Cat LTE $223,509, by WR This Cats Smart.