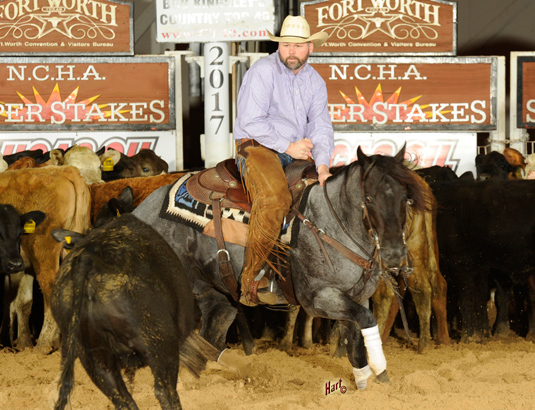 Hashtags made his debut as a 2016 NCHA Futurity Finalist (8th place) and this year has been a finalist in the Cattlemen’s Derby and the Ike Hamilton Futurity. Including his Super Stakes winner’s check of $74,095 and prior official earnings of $81,390, the blue roan stallion has earned $155,485.

Rice, whose biggest single paycheck came when he placed third in the 2013 NCHA Futurity riding Johnny Reyngo, had NCHA earnings of $1,355,492 coming into the Super Stakes; he is slated to be inducted into the NCHA Riders Hall of Fame in June.

Hot Revolver LTE $65,249 was an Abilene Spectacular and Arbuckle Mountain finalist under James Payne, before coming to the 2017 NCHA Super Stakes. The gray daughter of Spots Hot, sire of 2016 NCHA Futurity champion Second Spot, is the first performer out of Baretta Boon LTE $58,000, by Playgun.