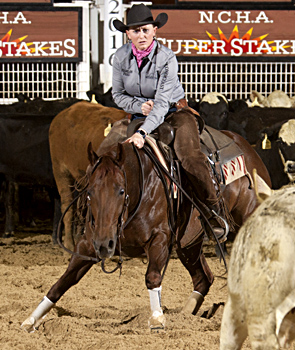 Hall of Famer Morgan Cromer and Maid Of Metal, by Metallic Cat, marked a 223 as the second contestant and held on for the win in the Lucas Oil NCHA Super Stakes Classic finals in Fort Worth Saturday. John Mitchell, third-to-last rider on CR Tuff Lucy, took the reserve title with a 222.5.

The win was the first for Cromer, 33, in historic Will Rogers Coliseum.

Maid Of Metal was bred by Beau and Ashley Galyean, and is owned by Judy Siebel of Ross, California. She is out of Pretty Smart Kitty, a Smart Lil Ricochet mare whose show career was reportedly curtailed by EPM. Pretty Smart Kitty is a granddaughter of Doc’s Kitty, the mare that Shorty Freeman showed to win the NCHA Derby and place second in the NCHA Futurity.

The Cromer/Siebel team have previously had success with Duals Dancer, a $100,000 earner that was a finalist in the NCHA Super Stakes and a dozen other major events.

Cromer’s previous highest finish in Will Rogers Coliseum was a fourth in the Western Bloodstock NCHA Winter Showdown in 2015 on Little Dirty Deeds.