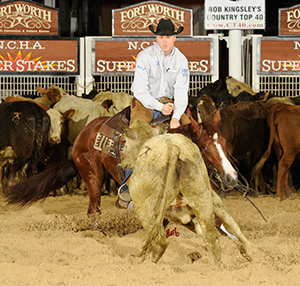 Metallic Cat’s reputation as a sire is growing by leaps and bounds, right alongside his offspring’s earnings. At the National Cutting Horse Association (NCHA) Super Stakes, which took place March 26-April 18 in Fort Worth, Texas, the stallion’s get surpassed the $3 million mark in a big way. Forty-three horses earned paychecks totaling $553,926, taking Metallic Cat’s Equi-Stat offspring record to $3,534,526.

Also at the NCHA Super Stakes, Lindy Burch rode Oxbox Ranch’s Adelle (out of Play Peek A Boon x Freckles Playboy) to a third-place finish in the NCHA Super Stakes Open, banking $38,747 between the semifinals and finals. DB Little Cat (out of Mates Little Cokette x Smart Mate) and Sheridan Clark were second in the Limited Non-Pro and fourth in the Non-Pro, earning $29,329. Metallic Manziel (out of Smart Look N Pepto x Peptoboonsmal) and Tag Rice were Reserve Champions in the Gelding Open and 16th in the Open, banking $29,261.

In all, 20 horses sired by Metallic Cat earned more than $10,000 each at the NCHA Super Stakes. The red roan stallion finished as the show’s leading sire, according to the NCHA.

Owned by Alvin and Becky Fults, of Amarillo, Texas, Metallic Cat’s first foals competed in 2014. Halfway through the season, “Denver” became only the second cutting stallion in history – One Time Pepto was the first – to top $1 million in offspring earnings with his first crop of performers. By the end of 2014, Metallic Cat had surpassed the $2 million mark, with 105 money-earners accumulating $2,027,976. Less than five months later, he’s added another $1.5 million to that total, with 144 money-earners averaging $24,545.