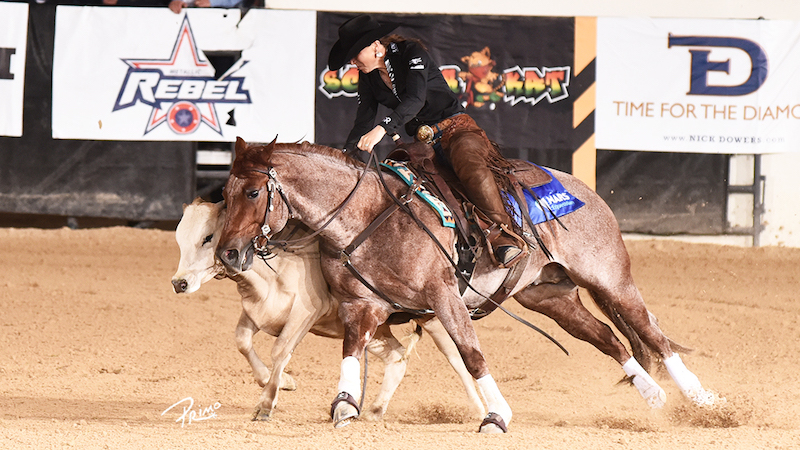 The show career of Hazardouz Material has been one of near-misses, but on Saturday, April 3, the stallion put it all together for trainer Erin Taormino in the National Reined Cow Horse Association (NRCHA) Stallion Stakes.

The son of Equi-Stat Elite $40 Million Sire Metallic Cat won the Open and a $43,786 first place paycheck while taking down the biggest event of his life. He and Taormino scored a 218.5 in the herd, 224 in the rein work and 224 down the fence for a 666.5 composite, edging out Reserve Champions Saddling At Sunrise (WR This Cats Smart x Sunshine Ingredient x Mr Sun O Lena)

“He couldn’t have been more on-point last night, I was so proud of him,” Taormino said.

Bred by Taylor Carbo, the 5-year-old stallion owned by Linda Mars now has lifetime earnings of more than $92,000.

“I’ve always known the talent was there but we [haven’t gotten it done.] At the [NRCHA Snaffle Bit] Futurity, the judges got him for a break of gait in the reining,” Taormino said. “The [NRCHA] Derby last year, he tripped down the fence. So, we’ve had a little bit of hard luck along the way.

“Every show I’ve gotten more confidence on him and he’s one that I know, if I just let him do it, he’s going to do his job.”

Harardouz Material, known as “Skeeter,” is out of successful broodmare Scooters Daisy Dukes, a daughter of Dual Smart Rey who has now produced more than $370,000 in cutting and reined cow horses. She also is the mother of 2021 NRCHA Stallion Stakes Non-Pro Champion A Gritty Kitty (by Chiquita Cat), and two-time NRCHA Stallion Stakes Open Champion Scooters Kat.

“Skeeter’s a really easy, good horse to be around. Westley rides with me on him and he’s just a good guy. Good minded, gentle and very serious all the time,” Taormino said. “He has never ever let me down. He is always trying, he’s always been a really great horse.”

Not one to let Skeeter have the spotlight, Taormino’s 3-year-old son Westley became the adorable center of attention during Saturday night’s awards ceremony as he hustled across the sandy arena to sit in front of Taormino in the saddle. He grappled for the microphone with his mother was interviewed about her victory by Russell Dilday.

“It’s a big honor to be able to compete and show against the quality of horses and riders that are out there. It’s no easy feat for anybody,” Taormino added humbly.