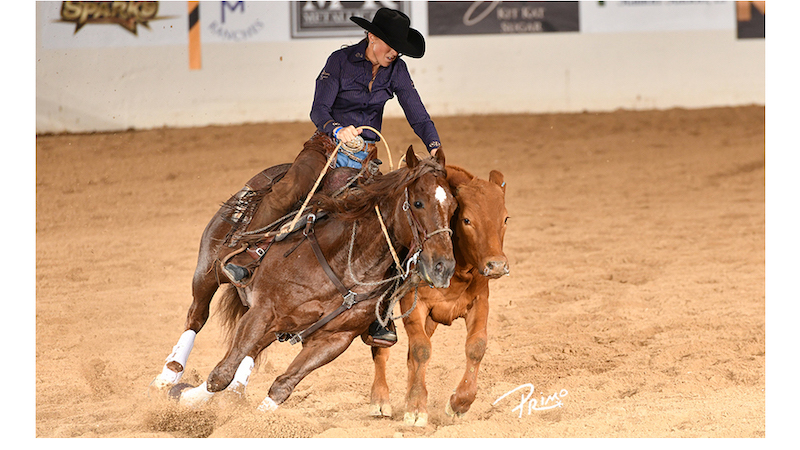 The first horse and rider duo to earn a 2021 NRCHA Stallion Stakes champion trophy were Im So Stunning (Metallic Cat x Absolutely Stunning x Smart Little Lena) and Erin Taormino in the Open Two-Rein Spectacular. With a 662 composite (221 herd/218 rein/223 cow), the 2015 roan gelding and Erin Taormino topped the 33-horse Open Two-Rein Spectacular field by a point and a half.

Taormino has trained the roan since late in his 2-year-old year. Prior to this win, the horse had earned $28,466 in reined cow horse competition.

“We’ve made finals and he’s never won anything big but has been a steady horse,” Taormino said. “We gelded him this winter and he really loves the gelding life.”

When she learned of the win, Taormino was all smiles.

“He’s a really fun horse to train,” she said. “The two rein class, the competition in it is incredible. The horses are amazing and the riders are amazing. To win [this class] in such a fabulous group is just an honor.”

In addition to the purse, the champion received a C.R. Morrison NRCHA trophy, a one-ear headstall with rawhide and silver buckles from Dennis Moreland Tack, a Platinum Performance gift certificate, and an UltraCruz prize pack from Santa Cruz Animal Health. For Reserve in the Open Two-Rein horse show class, they won a pair of Classic Fit Boots from the NRCHA.

The top two finishers in the Open Two-Rein Spectacular both hail from prestigious female families.