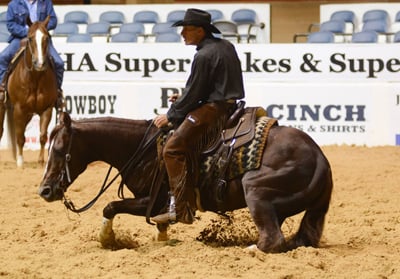 Out of the first hole, Johnny English carried Rowdy Larson to a 222, a score that could not be touched through the rest of the finals. Larson himself came the closest to it when he rode back into the herd on Metallic Ina and marked a 217, which earned the Reserve Championship and $6,712 for owner/breeder The Over Forty Ranch.

“It’s amazing. It’s kind of a dream come true for us,” said Larson, of Overbrook, Oklahoma. “I’ve got two really special horses this year, and I’m just happy to do good on them. It’s hard enough to have a good horse and get him showed, but having two of them and getting them both showed in the same night is a pretty amazing deal.”

Johnny English (out of Turtle Pie x Son Ofa Doc) was bred by Crown Ranch LP, of Weatherford, Texas, and is owned by Nick Meagher, of Antonita, Colorado. The stallion and Metallic Ina (out of Hickory Badger Ina x Doc’s Hickory) are both by Equi-Stat Elite $11 Million Sire Metallic Cat. “Johnny’s” lifetime earnings now stand at $21,670, while Metallic Ina’s are approaching $23,000. Larson’s bankroll pushed past the $300,000 marker.

For complete coverage of the NCHA Super Stakes, subscribe to Quarter Horse News.