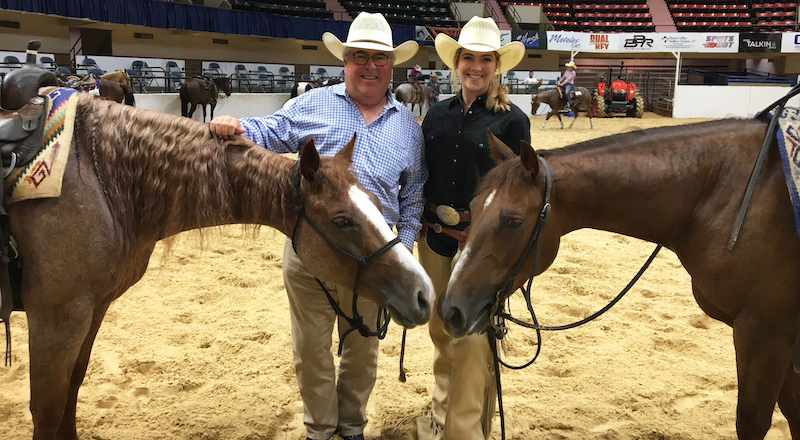 The Patton family has been heavily involved with cutting since businessman Bobby Patton jumped into the business with a splash five years ago. But, for all that involvement – including buying leading sire Metallic Cat — no one from the family had ever ridden to the herd in a show.

And, what started as fun father-daughter time in the practice pen during the coronavirus pandemic quickly turned into a show pen debut and, in the case of Rachel Patton, the winner’s circle at the National Cutting Horse Association (NCHA) Metallic Cat Summer Spectacular.

Though the 19-year-old was thrilled to win the 4-Year-Old Limited Amateur title, she said the “coolest part” was seeing her dad also saddle up at the show in Fort Worth, Texas.

Because, as passionate as the Fort Worth businessman is about cutting since he entered the sport five years ago, he hadn’t shown a cutting horse himself until he made the jump from practicing with his daughter to the bright lights of the Will Rogers Coliseum.

“We were just kind of looking for something to do [and] this was fun,” Rachel explained. “And, my dad is definitely so into the cutting. His whole heart is into it. He’s into the industry more than anything I’ve seen him be in in a while.”

Although the Pattons hadn’t competed in cutting until this year’s Summer Spectacular, the family has been extremely active in the sport since entering the cutting horse breeding business in late 2015, when Bobby bought 11 horses at the dispersal of Walton’s Rocking W Ranch — purchases that included the High Brow Cat stallion Boon San and his $244,049-winning daughter Boon San Baby (out of Stylish Baby Doll x SR Instant Choice).

Acquisitions from the sale were sent to Rocking P Ranch, his newly purchased facility that was formerly Jon and Abby Winkelried’s Marvine Ranch.

Though Bobby was already involved in professional sports — he’s a co-owner of the Los Angeles Dodgers baseball team — the Walton dispersal was his first venture into the cutting bloodstock business.

In 2017, the family got even more involved in cutting when Bobby bought Metallic Cat from longtime owner Fults Ranch Ltd. for an undisclosed sum. At the time, the NCHA Futurity Open Champion was an Equi-Stat Elite $14 Million Sire. The stallion more than doubled his progeny earnings in less than three years after the purchase — recently hitting the $35 million mark.

As an owner, Rocking P Ranch has accumulated an Equi-Stat record of more than $1.2 million since 2014. Some of the operation’s show-pen highlights include Rockin Sallycat’s third-place finish in the 2015 NCHA Futurity Open and Cinca Im Hot’s win in the 2017 Breeder’s Invitational Derby.

Rachel said the main obstacle keeping the family from the cutting show pen had always been a lack of time. Her dad had a busy schedule and she was occupied by school, first high school and then studying government at the University of Texas in Austin.

When the coronavirus hit and restrictions were put into place for travel, schools and large gatherings, Rachel said that opened the door to the cutting pen.

“We were looking for things to do, and my dad’s like, ‘We have all these amazing horses waiting to be ridden, waiting for you to ride. This is the perfect opportunity to learn cutting,’” she said.

They went to the family’s ranch in Aledo and started riding with resident trainer Jesse Lennox. The high-energy professional had her on cows right away, Rachel said, quickly becoming her “personal hype man.”

He suggested showing at the Summer Spectacular, which was sponsored by Metallic Cat. Rachel, who rode barrel horses growing up on the family’s South Texas ranch but didn’t know much about the rules of cutting, said she was hesitant to jump into an NCHA Triple Crown event on her first start.

So, she showed once at a weekend show. Then, she went to the Summer Spectacular.

Rachel thought her best shot was with the older, more seasoned 5- and 6-year-old horses. Just happy to be in the finals, she thought her chances at a win were most likely over after finishing 13th in the 5/6-Year-Old Limited Amateur finals with Summer Shandy (out of Pippis Longstocking x Dual Smart Rey) and 15th with Metallic Curveball (out of Cinca de Maya x Dual Rey).

However, there was still Cinca Metallic — Metallic Curveball’s younger sister — in the 4-Year-Old Limited Amateur. Things hadn’t gone well with the horse the last time Rachel rode her, so she tempered her expectations. Plus, going in, she said people had prepared her that she probably wouldn’t make the finals with a less experienced 4-year-old.

She figured she’d just focus on having fun.

“I was like, why not? Let’s just keep riding for more practice,” she said. “And, then I ended up going to the finals for the Limited Amateur and winning it.”

Her father rode a 5-year-old gelding named One Suspicious Mind in the 5/6-Year-Old Limited Amateur. They marked a 180 and didn’t advance to the next round, but Rachel was impressed with how well her father did in his first foray into the cutting pen.

She said he’d originally entered after hearing talk spectators might be banned from the show due to COVID-19-related restrictions, reasoning that if he was a competitor he’d be able to be there regardless of any restrictions.

When the spectator ban didn’t materialize, she expected him to withdraw — but he competed anyway.

“He went out there and rocked it. So, that was the coolest thing ever,” she said. “I was probably more nervous for his run than I was for any of mine.”

Though Bobby didn’t make the finals, Rachel said her dad now has the cutting bug and can’t wait to get back into the herd. In fact, she said that might include an appearance at this year’s NCHA Futurity.

“We have five awesome 3-year-olds at the barn right now, and Jesse [Lennox] will ride the top two. I’ll ride three and four, and my dad’s looking at riding five,” she said. “So, that’s all pretty exciting.”

It’s safe to say the sport won two converts at the Summer Spectacular. And, Rachel said, her experience shows how welcoming the sport is for newcomers — and it dispelled some worries she’d had about not knowing enough, or not having the skills to be able to find a place in the sport.

“If they’re thinking about it, if they’re on the fence, just do it and see what happens,” she said. “Because, good things can come out.”