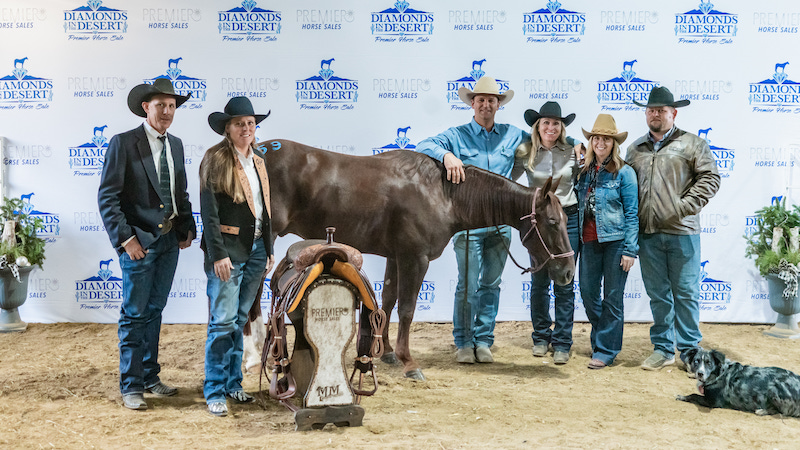 A money-winning gelding by Metallic Cat broke a sale company’s previous records when he topped the annual Diamonds in the Desert Premier Horse Sale in Fort Worth, Texas.

The horse, Jack B Metallic, sold for $260,000 at the sale held Dec. 5 at Billy Bob’s Texas in the Fort Worth Stockyards. Typically held in Las Vegas, the sale moved to Fort Worth this year as a result of the relocation of the National Finals Rodeo to the Lone Star State.

Though sale organizers never for sure which horse will end up being the sales topper, they said there clearly was a lot of interest in Jack B Metallic going into the sale. He ended up being the sale company’s highest-selling horse ever.

Codi Gines, co-owner of sale manager MM Auction Services, said Jack B Metallic’s status as a broke, gentle gelding trained in cutting and roping made the Turner Performance Horses consignee stand out as a “showstopper.”

“Everything he had to offer was awesome, so we knew that he could be one of the high sellers,” she said. “But you just can never pick.”

Officials with the sale do not release buyer names, but Gines said Jack B Metallic went to a home in Clark, Colorado. Second-high seller Shine Stylin Shine was bought by someone from Texas, she said.

Diamonds in The Desert High Sellers

Consigned by Turner Performance Horses, the $260,000 sales topper Jack B Metallic was a winning cutter with a lifetime Equi-Stat record of $5,459. He competed in the Western United States and the Pacific Northwest for owner Paje Turner, winning money at Rocking K Productions events, the Utah Cutting Horse Association Futurity show as well as other limited-age events and weekend shows.

His dam, Charlotte Rey, is a daughter of the late Dual Rey who has produced two money earners in Equi-Stat: Jack B Metallic and his full sister, Reychel Cat ($14,831).

Jack B Metallic was bred by Mark and Anne Marie Pearson, of Spearman, Texas.