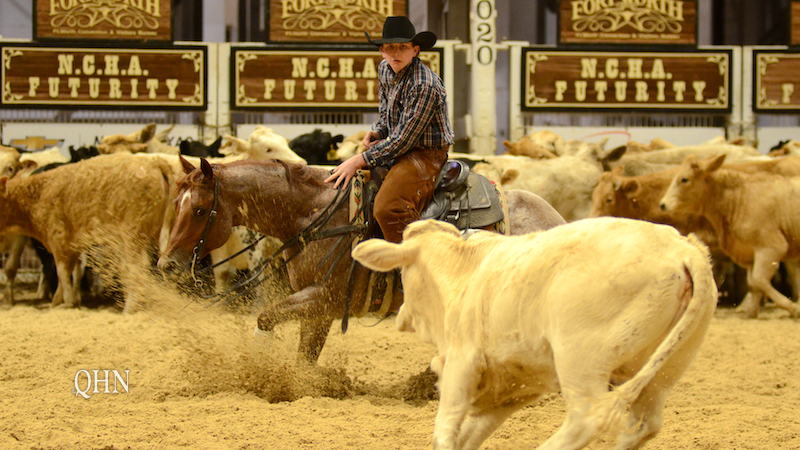 He was second two years ago. Last year, he rode I Reckon So to the co-championship when he shared the win with Kristen Galyean and Coureygous.

He’d felt good about his chances this year with Fiddle And Steel, a handsome red roan Metallic Cat stallion bred and owned by his parents, Russ and Janet Westfall. However, he cut a cow in the finals so tough that he started to have doubts.

Fiddle And Steel hung, tough, though, and refused to let the cow get away from him. They finished the run with style, and were rewarded by the judges with a huge 227. The crowd went wild.

Westfall was grateful to his herd help, which included his dad, as well as to the horse.

“He makes it pretty easy. Any time you feel like you’re in a bind, or the few times I showed him this week I felt like, oh boy, this is a little hairy, here. He’s like, ‘Oh, no. I got it.

Their 227 took the lead from the eventual Reserve Champions, Nitreyious and Reyly Plendl, who marked a 222 in the first of the two-set finals.

A gelding by Metallic Cat, Nitreyious is out of the mare Cherrey (by Dual Rey). Bred by Rodney Wrinkle Cutting Horses, he is co-owned by Reyly and her twin sister and fellow cutter, Regan Plendl.

Fiddle And Steel is one of five money earners our of the mare Lil Bit Wreckless, a daughter of CD Royal who now has produced winners of more than $240,000. Thanks to his $74,605 first-place paycheck from the NCHA Futurity Non-Pro, Fiddle And Steel is his mother’s leading earner.

Like Fiddle And Steel, all four of the mare’s other winners were bred by Westfall’s parents, Russ and Janet.