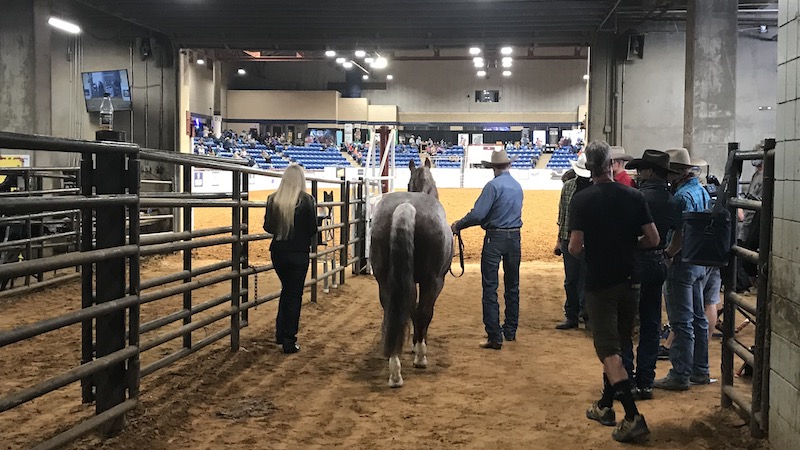 Cast and crew from the series, which airs on the Paramount Network, were at the show in Fort Worth on Wednesday, Oct. 21, shooting for an upcoming season of the show.

Metallic Cat’s shoot was in the John Justin Arena, which that afternoon played host to the Open Hackamore and Open Bridle finals. Crews set up along the concourse to film the stallion, as well as action on the arena floor from some of the day’s classes.

Metallic Cat was led into the arena; he did not compete in Wednesday’s show.

The 15-year-old Quarter Horse stallion was relaxed as he observed the action at the Will Rogers Memorial Center. Unfazed by the film crew or crowd, he calmly took in the scene and greeted admirers.

The Yellowstone crew filmed throughout the day. One of the stallion’s sons, Jittery, won the Open Hackamore finals.

Metallic Cat’s owner, Bobby Patton, purchased the right for the National Cutting Horse Association (NCHA) Futurity Open Champion to be on the show at a charity auction during last year’s NCHA Futurity.

Money from the $165,000 bid benefitted the NCHA Charities Foundation. Yellowstone co-creator and producer Taylor Sheridan donated the right to have a stallion written into script of the series.

As of the day of the film shoot, Metallic Cat has sired the winners of more than $37 million. More than $3.4 million of that was earned in reined cow horse competition.

The stallion is also the title sponsor of this year’s NRCHA Snaffle Bit Futurity, presented by Metallic Cat.