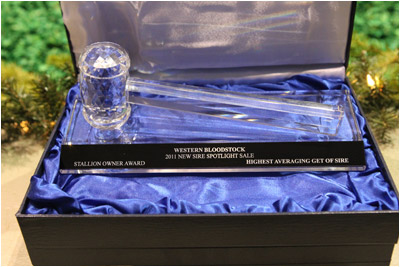 Metallic Cat set the 2011 NCHA Futurity Sales on fire, finishing as the No. 2 sire on the overall and yearling charts. The 2005 stallion, who is owned by Alvin and Becky Fults, Amarillo, Texas, kicked off his career by winning the 2008 NCHA Futurity with Beau Galyean and then performing to $637,711. Now, his babies are on the ground and on the way. According to AQHA, Metallic Cat’s registered foal count is 52 for 2010 and 92 for 2011. At the NCHA Futurity Sales last December, Metallic Cat had 22 of 29 consigned foals net $638,000 for a $29,000 average and $22,500 median. This young sire – one whose foals won’t hit the show pen until 2013 – bested older mainstays such as Dual Rey, Smart Little Lena and Peptoboonsmal.

Quarter Horse News asked owner Alvin Fults about his stallion’s success at the sales. He responded, “I’m honored. I am glad to see the consistency of his foals – the way all those colts are looking the same. That’s what we were hoping for, that he was going to be able to consistently be able to make a nice colt.”

As for what it’s like waiting for that 2013 debut, Fults said, “The wait is hard. We pulled our yearlings up a little bit early and went ahead
and broke them; we just couldn’t take it anymore. They’re doing awesome.”

Jordan Furnish made those first rides on Fults’ Metallic Cat foals. Was Fults there for the occasion?

“You bet I was!” he answered. “I was there when he got on every one of them. They just went right on – never missed a lick or acted up. Jordan’s comment to me was, ‘I’m showing them something one day and they’re doing it the next day.'”