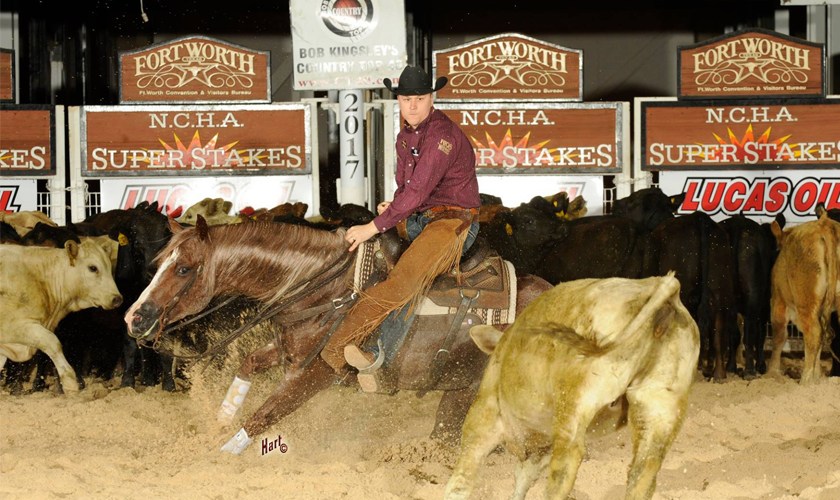 Metallic Rebel. The name speaks for itself. He is a force in the cutting pen that can seldom be beat. At the Southern Cutting Futurity, he added a couple major accomplishments to his list of accolades – National Cutting Horse Association (NCHA) Open Horse of the Year and a career record score.
Equi-Stat Elite $3 Million Rider Beau Galyean and “Rebel” (Metallic Cat x Sweet Abra x Abrakadabracre) have been going nonstop all season in an effort to win the NCHA Open Horse of the Year title. Rebel has been neck and neck in the race with NCHA Super Stakes Champion Hashtags (Metallic Cat x Dual Rey Tag x Dual Rey), ridden by Tatum Rice, but some recent success has helped Rebel widen the point gap.
In the past month, Galyean and 5-year-old Rebel, who was bred by Fults Ranch and is owned by Thomas Guinn, won the Classic/Challenge Open at the Brazos Bash and Pacific Coast Cutting Horse Association Futurity to add 80 points to their previous 557-point total.
Last week at the Southern Cutting Futurity, they threw in an additional 14 points after another solid finish in the Classic/Challenge Open to bring their point total to 651, while Hashtags stands at 546 points. Rebel’s final push toward the end of the point year helped him unofficially seal the deal on the NCHA Open Horse of the Year title.
“That horse is just something else,” Galyean said of Rebel, who now boasts lifetime earnings of more than $400,000. “You are always just pushing yourself to do the best you can, but this horse makes you want to push harder. He did it, and that is cool.”
Gaylean also noticed before the Southern that Rebel was just about $9,000 behind Galyean’s former mount Cattalou (High Brow Cat x Louella Again x Dual Pep), who is owned by W.S. “Billy” Morris III, in the NCHA Open World Champion Stallion race. That narrow margin motivated Galyean to ride in an NCHA Open weekend class at the event, and his performance earned the pair a massive 232.
“Every big score I have ever had has been on this horse,” said Galyean, whose personal best before the Southern was a 229. “On Metallic Cat, the highest I had was about a [2]28, and then Cattalou marked I think a [2]26 at the BI [Breeder’s Invitational].
“This horse has had a couple [2]28s, and [2]29s, and now a [2]32. It is kind of funny thinking about this horse, because I have thought about marking a score that high. But that is something you never think about on other horses. I thought if I could break the 230 barrier, it would be on him. There are not many horses that I could say that about. This horse is just so special, and he is really making his mark.” 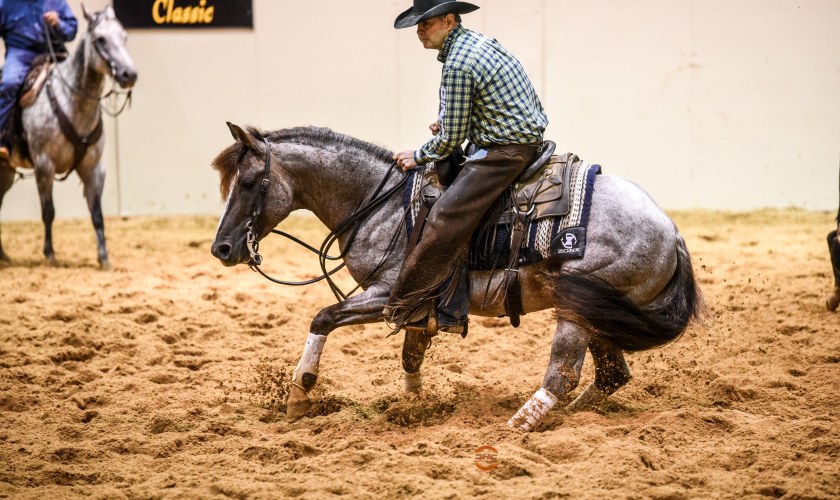 Sweat Son and Equi-Stat Elite $8 Million Rider Lloyd Cox continued to get things done at the PCCHA Futurity in the Derby ranks with the Open Championship.
The victory for Cox, of Marietta, Oklahoma, and the 2013 stallion (Metallic Cat x Travalen Miss Mosa x Travalena) comes on the heels of their recent Cotton Stakes Derby Open Championship.
Their score of 221.5 was good for a $16,000 paycheck. Bred by Randy and Jenny Free, of Plano, Texas, Sweat Son has now won more than $50,000 for owner NW VandeSteeg, of Hailey, Idaho. 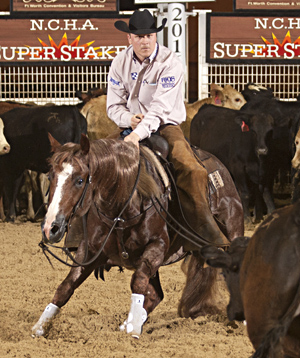 Metallic Rebel LTE $377,496, winner of the 2017 Brazos Bash Open Classic on September 25 in Weatherford, Tex., scored 225 points on Monday, October 9, to claim the championship of the PCCHA Futurity Classic Challenge, in Las Vegas, Nev. Shown by Beau Galyean for Thomas Guinn, Philadelphia, Miss., the 5-year-old red roan stallion, sired by Metallic Cat, is the leading contender for 2017 NCHA Open Horse of the Year, as well as 2017’s leading money earner.
The PCCHA Classic Challenge, with a winner’s purse of $16,000, was Metallic Rebel’s sixth 2017 limited age win and his eleventh major lifetime win. 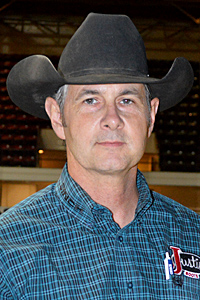 Sweat Son, by Metallic Cat, scored 221.5 points under Lloyd Cox to win the 2017 PCCHA Futurity Open 4-year-old finals and $16,000 on Tuesday, October 10, in Las Vegas. Betchalou, shown by Morgan Cromer, and SVR Caught Ya Lookin, with Grant Setnicka, each scored 219 points to earn $12,500 and split second and third.
This was the third major win in 2017 for Sweat Son LTE $71,665, who is owned by N.W. VandeSteeg, Hailey, Idaho. The red roan stallion also won the Cotton Stakes with Cox and the Pacific Coast Winter Roundup with Tom Shelly, and placed second in the PCCHA Cutting Stakes with Cox.

Join the Metallic Cat Team for the 2018 Season
Just as he’s done all year long, Metallic Cat continued to break records at the National Reined Cow Horse Association Snaffle Bit Futurity, which concluded Saturday evening in Fort Worth, Texas. With seven – yes, that’s seven offspring – in the Open finals, Metallic Cat wrapped up that single division with $106,545 in sire earnings. That makes the 12-year-old stallion, unofficially, an NRCHA Million Dollar Sire. It took Metallic Cat just four years to reach that impressive milestone!
Now at his new home, the Rocking P Ranch in Fort Worth, the superstar sire knocked the ball out of the park in the first major event of the fall futurity season. And now’s your chance to be a part of the performance horse industry’s most successful team – the Metallic Cat team.
Starting on Wednesday, Nov. 1, the books open on this stallion’s 2018 breeding season. Breedings are limited to 200 mares, and bookings are available on a first-come, first served basis. Metallic Cat’s fee is $15,000, which includes the chute fee.
“Metallic Cat has proven himself as the hottest young sire in the business, and we’re looking ahead to a bright and exciting future,” said Bobby Patton, the stallion’s owner.
Thanks to this latest infusion of reined cow horse earnings, Metallic Cat’s offspring earnings stand at $16 million. No Western performance horse has earned this much, this quickly. Plus, the World Series of the performance horse industry – the National Cutting Horse Association World Championship Futurity – is right around the corner. The elite event begins next month, and several Metallic Cats are entered in multiple divisions.
So get ahead of the game and book your mare early for Metallic Cat’s 2018 season. For more information, please visit www.metalliccat.com.