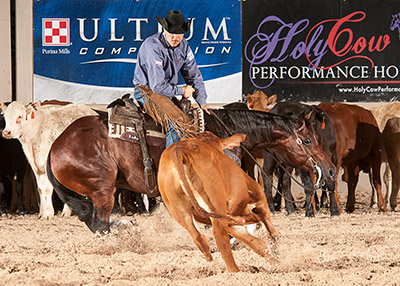 Sweet Metallic (Metallic Cat x Sweet Abra), a mare owned by Beau and Ashley Galyean, of Fort Worth, Texas, and ridden by Beau, placed fourth with a 218.5. As the top-placing Derby Open entry sired by 2005 stallion Metallic Cat, Sweet Metallic earned a $25,000 Metallic Cat Incentive bonus. Including a total of $40,000 in Metallic Cat bonuses, 4-year-olds sired by “Denver” earned more than $75,000 in the PCCHA Derby Open. That allowed Metallic Cat to surpass $1 million in offspring earnings. 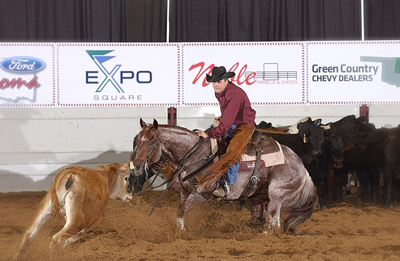 Among the National Cutting Horse Association (NCHA) and cutting horse industry, Metallic Cat is a widely recognized name. The 2005 red roan Quarter Horse stallion, out of High Brow Cat and Chers Shadow by Peptoboonsmal, debuted in the futurity with trainer Beau Galyean and retired 12 shows later after never losing a cow throughout his entire show career. He was the 2008 NCHA Open Futurity Champion and NCHA Horse of the Year in 2009 as well as the top money earning horse all ages all divisions and Derby Open Champion at the 2009 Breeder’s Invitational (BI).

As a retired NCHA champion, Metallic Cat (owned by the Fults family) now spends his days at Fults Ranch in Amarillo, Texas breeding new champions to continue to live out his legacy within the cutting industry. There are currently 34 offspring of Metallic Cat actively competing, including Metallika out of Metallic Cat and Nyoka Pep by Dual Pep.

Metallic Cat also broke a new personal record at the 2014 BI with his offspring surpassing the earning amount of his own Sire’s earnings. The 27-year-old sire, High Brow Cat, was the top sire earner at the BI until son, Metallic Cat, exceeded his father’s earnings and became the new top earner. Metallic Cat’s 12 offspring that competed at the 2014 BI, all 4-year-olds, earned a total of $260,402, while High Brow Cat’s 27 offspring ranging from 4 to 6-year-olds earned a total of $227,576.

Metallic Cat has proven to be a top cutting horse sire, creating quality competitive cutting horses time after time. The two main traits Metallic Cat passes on to his offspring, according to owner Alvin Fults, is his near perfect conformation and cow smarts. These two traits combine to make well rounded, easily trainable, and successful offspring within the cutting industry. Even with all of the success Metallic Cat has had as a sire already, he has no plans of slowing down anytime soon.

“His future is very bright. This year [Metallic Cat] had 34 colts showing out of 45 which is over half of the foals that just hit the ground running in this sport. Next year we have over 200 that are registered, and the year after that we have over 200 as well,” said Alvin Fults on Metallic Cat’s future as a cutting horse sire. “His offspring so far have earned approximately $1,018,303 so we’re very excited to say the least.”