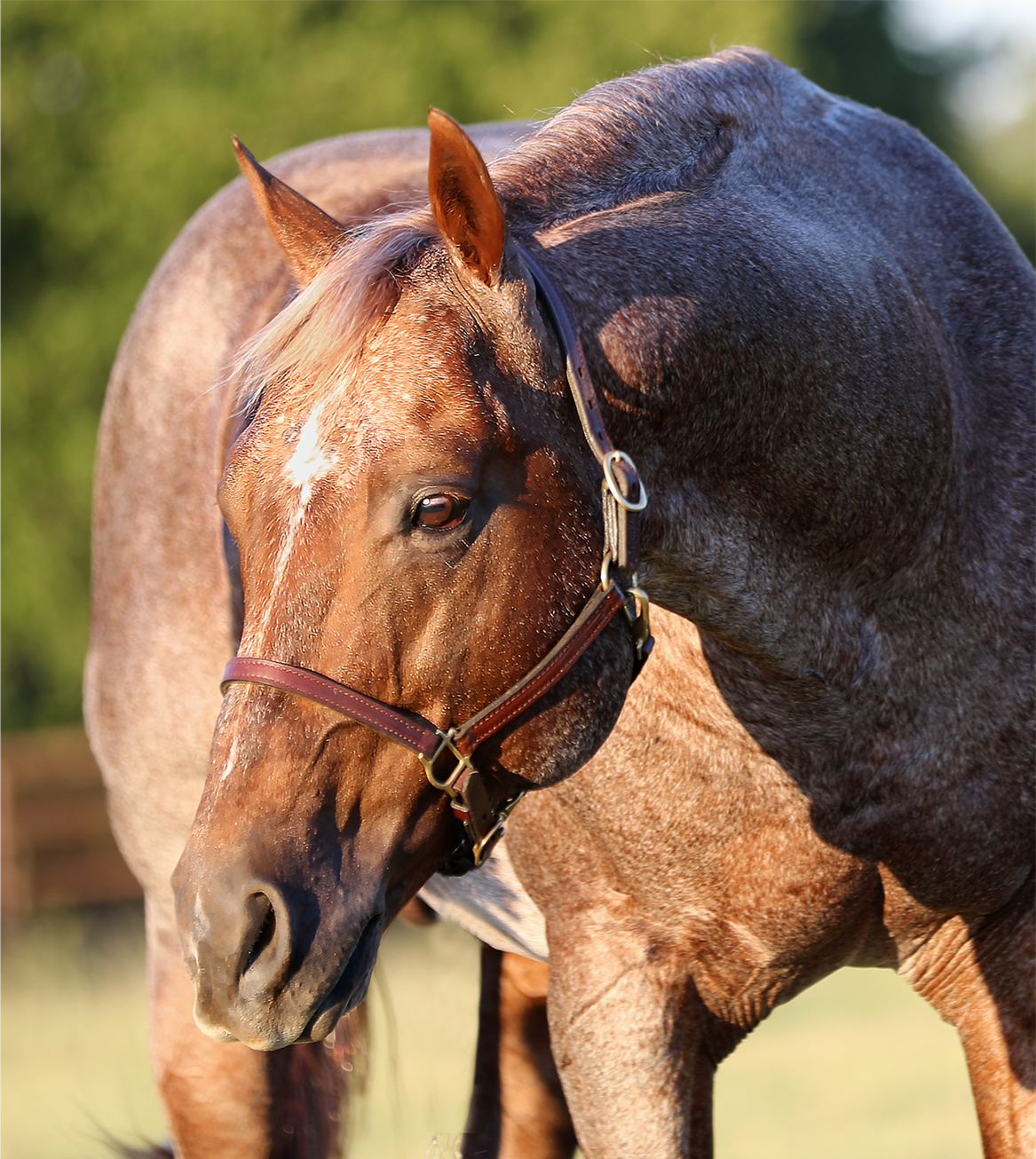 In a dizzying ascent to the top of the National Reined Cow Horse Association’s sire earnings list, Metallic Cat now sits at Number One. The red roan stallion’s offspring has cut, reined and gone down the fence to the tune of more than $4,250,000*.

Owned by Bobby Patton’s Rocking P Ranch, based in Patton’s hometown of Weatherford, Texas, the 2005 stallion by High Brow Cat and out of Chers Shadow (by Peptoboonsmal) supported reined cow horse before becoming the presenting sponsor of the NRCHA Snaffle Bit Futurity® in 2019, the year he also was named the NRCHA Sire of the Year. With this newest accolade, Metallic Cat continues to add to a résumé that began when the stallion was showing in the dirt at the Will Rogers Coliseum earning multiple National Cutting Horse Association titles.

Bred by the Roan Rangers and shown by Beau Galyean for then-owners Alvin and Becky Fults’ Fults Ranch, the stallion never lost a cow in the cutting pen and amassed more than $637,000 in lifetime earnings.

“We are just thrilled he reached this milestone in such a short time,” said Alvin Fults. “That was always a goal of ours when we started breeding with Metallic Cat to the cow horse industry breeders. The sky is the limit where he goes; there are lots of offspring showing and will be for many more years. Congratulations to Bobby Patton for all he’s done to keep promoting Metallic Cat.”

Patton acquired the stallion in 2015 a year after he had purchased Spots Hot, a cutting horse stallion that he said showed him what the breeding business was like.

“I could see an immediate return on investment in the breeding year following buying ‘Spot.’ That gave me a taste of stallion ownership and an understanding of the business,” said Patton. “When I got Metallic Cat, I wanted to do something different to market him. I have to give Debbie [Roberts] credit because she thought it would be a good idea to branch Metallic Cat out to reined cow horses and that led to our involvement in the NRCHA. It made sense to me. At that time, I didn’t have an appreciation of [cow horse] but I got educated and gained perspective on the industry.”

For 17 years, Shining Spark reigned as the king of cow horse sires. He reached all-time leading sire status first in 2003, and remained at the top until September of this year. He was the first sire to reach Three Million Dollar Sire status in the NRCHA and is the Number One Maternal Grandsire of Cow Horse Money Earners, according to Equi-Stat records. His highest money-earning offspring in the NRCHA is Smart Shinetta (out of Smart Hickory by Docs Hickory), a 2002 mare with $128,169.92 in the books.

“I want to tip my hat to Carol Rose and Shining Spark,” Patton said. “We may be the new leader in lifetime earnings, but that horse has had nearly 20 years atop the industry. There are a lot of Metallic Cat and Shining Spark crosses out there and that benefits our entire industry.”

California reined cow horse trainer and NRCHA Million Dollar Rider Clayton Edsall credits Metallic Cat’s ability to sire a trainable horse with the success offspring have had in the multi-discipline reined cow horse arena. Edsall trains and shows the top-earning offspring, Metallic Train (out of Sparking Train by Shining Spark). “Coco” and Edsall have laid claim to $172,250.02* in earnings, and most recently placed third in the Run For A Million Invitational Fence Work Challenge presented by Teton Ridge.

“Metallic Cat’s have so much stop and desire to work a cow. That is why time and again, we suggest that owners look at purchasing Metallic Cat offspring and also having customers breed their mares to him,” Edsall said. “They’re attractive but the biggest thing is that you have a trainable mind. One of the reasons you see so many Metallic Cats in the show pen, the winner’s circle and the sale is that they have the ability to be trained and be successful. I’ve found that even if one doesn’t make a cutting horse, it makes a cow horse or a rope horse. He checks a lot of boxes as a breeder—color, size and bone, athleticism and mind.”

With the multi-dimensional reined cow horse competition, and the steer stopping component of the World’s Greatest Horseman event, trainability comes into play just as much as athleticism. Metallic Cat’s top two NRCHA stallion offspring are both horses that have competed in all aspects of reined cow horse events. Call Me Mitch, a 2011 stallion out of Miss Hickory Hill (by Docs Hickory) and owned by the late Estelle Roitblat, has $171,376.71 in earnings and Cats Picasso, a 2012 stallion out of Playboys Vixen (by Hickoryote) and owned by Coast Performance Horses, has $159,096.60.

Though the older horses rise to the top of the 437-horse list of Metallic Cat’s offspring in the NRCHA database, the young performers are just as competitive. In April, 2016 stallion Hazardouz Material, out of Scooters Daisy Dukes, earned the NRCHA Stallion Stakes Open Championship for owner Linda Mars, and lifetime earnings to $104,517.62. In July, 2017 stallion Ricato Suave, out of Hip Hip Sue Rey and owned by Shaleah Hester and Madeline Fountain, took the Dom Conicelli Memorial Eastern Derby Open Derby Champion title to push that horse’s earnings to $104,601.49.

“This is a monumental moment for our industry, one in which we simultaneously honor the ongoing influence of the incomparable Shining Spark and celebrate the meteoric rise of Metallic Cat,” said Anna Morrison, NRCHA executive director. “Metallic Cat’s mark on reined cow horse is evident as you watch the athleticism and talent of his offspring in our arenas. We are grateful to Bobby Patton and Rocking P Ranch for their ongoing support of NRCHA, and are proud to celebrate this remarkable accomplishment with them.”

With all that he’s given to the equine industry as a $42 million dollar sire in cutting, reining and reined cow horse, Metallic Cat’s connections, led by long-time manager Roberts, continue to heavily support the NRCHA both in and out of the arena.

“A lot of people think of me as ‘an NCHA guy,’ but I want to emphasize how important NRCHA is to me,” said Patton. “It means a lot to me to support the NRCHA and continue our sponsorship, especially through the flagship event, which will be long-term. With the benefit of hindsight, Debbie had a lot of foresight looking at the NRCHA and wanting Metallic Cat and me to be involved.”