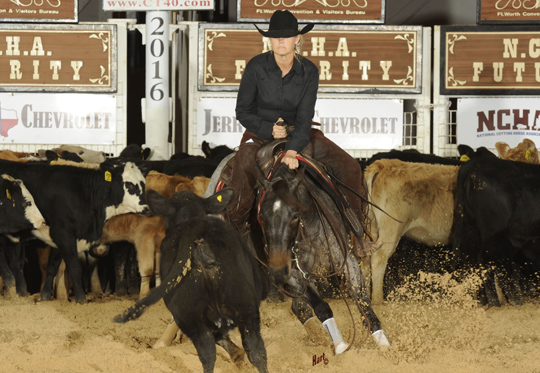 Metallic Merry and Cara Brewer matched their 220 in the first round with a 220 in the second to take the lead in the first day of Open second-round competition Wednesday at the Jerry’s Chevrolet NCHA Futurity, presented by Great American Insurance.

Metallic Merry is a bay roan mare bred by Cindy McIlvanie and owned by Michelle and Michael Merkley of Peoria, Illinois. She is by Metallic Cat out of Playguns Star, a Playgun mare that Cara Brewer’s mother, Sue Barry, rode to fifth place in the 2001 NCHA Non-Pro Futurity.

Playguns Star earned $115,000 and has produced five money earners, including Stars And Cats, a three-quarter sister to Metallic Merry that Brewer rode to the Breeders Invitational finals.

UPDATE: Metallic Merry’s score held up to lead after the second round of the Open. Sixty-four horses marked 432.5 or better to advance to the semi-finals, scheduled for Friday, December 9. 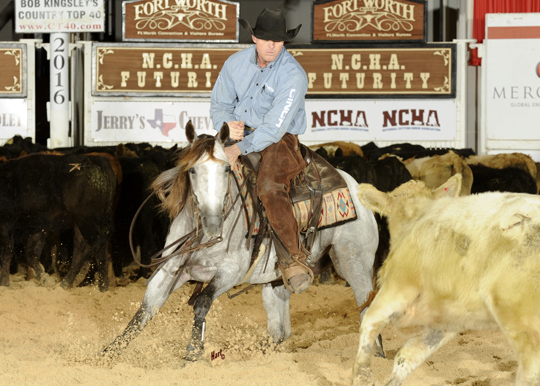 Two-time NCHA Futurity champion Craig Thompson and Metallicity took the lead Friday in the first round of the Open at the Jerry’s Chevrolet NCHA Futurity, presented by Great American Insurance, in Fort Worth.

They marked 223 in the third set of the day to move ahead of a three-way tie for second at 221, shared by Sylver Dollar, The Golden Shot and BFR Call Me Catniss.

Metallicity is by Metallic Cat out of Ms Silver Pitchfork, by Playgun. The 3-year-old mare was bred by Patrick and Laura Collins, who also bred and owned Thompson’s NCHA Futurity winners, Oh Cay Felix (2006) and Oh Miss Caroline (2011).

She is owned by the Collins’ son, Quinn of Washington, Texas, and his wife, Caroline, who is Oh Miss Caroline’s namesake.

Thompson, 46, is an NCHA Hall of Fame Rider, with career earnings of $2.3 million. He has qualified for the NCHA Futurity finals six times, and won twice.

Friday’s new member of the 221 club, BFR Call Me Catniss, is bred and owned by Beechfork Ranch and ridden by Geoffrey Sheehan. The mare is by High Brow Cat out of SDP Finely Tuned.

Sylver Dollar and The Golden Shot marked their 221s on the first day of competition. 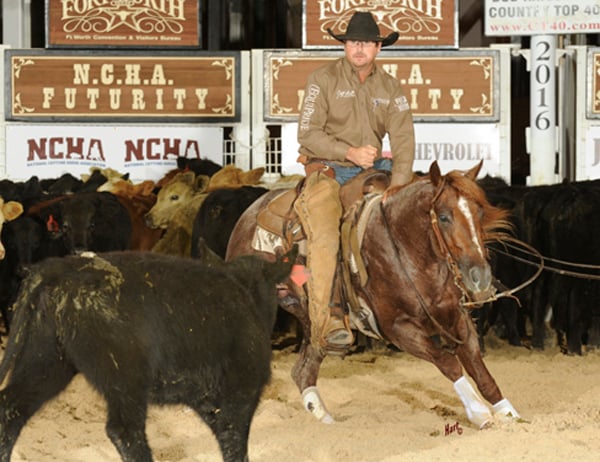 This is not the only milestone that he reached in quick fashion. “Denver” is by Equi-Stat Elite $73 Million Sire High Brow Cat and out of the Peptoboonsmal mare Chers Shadow. His $637,711 in earnings makes him the top performer on his dam’s produce record, and he is the highest-earning son of High Brow Cat. His first crop hit the By March 2014, his first crop had already earned more than $500,000. By that summer, he achieved Equi-Stat Elite $1 Million Sire status, making him only the second stallion accomplish the feat that early in his career.

Less than a year later, his offspring record reached $3 million. The checks kept rolling in for horses sired by the 11-year-old stallion, who was bred by The Roan Rangers, of Weatherford, Texas, and just five months later, he reached the $5 million marker. As of November, his record included 375 money-earners with average earnings of $26,757.

“It’s just amazing how fast he hit [$5 million], then to hit 10… We’re just blown away,” said Alvin Fults, who owns the stallion with his wife, Becky. “We had been watching, but I didn’t think he was going to go over 10 before the [National Cutting Horse Association (NCHA)] Futurity. I was like, ‘I just don’t see how it’s going to happen.’ Then all of a sudden, he started climbing. I was one of the doubters.”

Because he has reached the $10 million milestone, and with his foals taking home both the Open and Reserve championships at last year’s NCHA Futurity, the Fultses feel that Denver’s success as a sire has been validated.

“It means the world to us. He is our life out here and he is what we focus on,” Alvin said. “We felt like last year, after winning the Futurity, we could say that he was solidified. And maybe, at that point, he was, but this kind of puts the cherry on the pie for us. Reaching $10 million really solidified him as a sire.”

“It’s incredible,” Becky added. “I remember hitting $1 million in Vegas [at the Pacific Coast Cutting Horse Association Derby in 2014]. We’re so blessed to have him and to have people that took a chance on him in the beginning and bred to him. Where he is now, we’re eternally grateful. It’s a family affair here. We don’t take anything for granted, and we’re appreciative of each and every on of our mare owners that breed to him and are confident in him just like we are. It’s very humbling.”