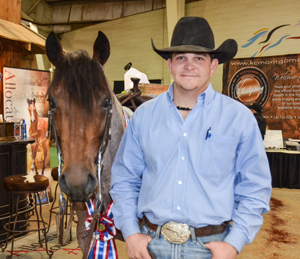 Drawing up 15th in the working order left the Wilton, California, rider with plenty of time to watch the competition.

“I know what’s been marked and I knew there was room up there at the top and then in between all those people that I could try to sneak in if I could and it just worked out that we won it,” said Hedlund, an earner of $438,122. “We cut everything we had talked about, for the most part, and then the last cow was just really good and it just capped off the end of run.”

Meteles Cat (Metallic Cat x Teles Lies x Lenas Telesis) has had quite the success under the saddle of Cody and his father, Rock, who bred the horse. Meteles Cat has lifetime earnings of $111,279, and is currently in a battle for the 2014 NCHA Non-Pro Horse of the Year title.