With Metallic Cat’s second full foal crop now showing as four year old’s, we could not be more enthusiastic about the future of our young stallion. Metallic Cat’s latest compliments are, Super Stakes Top Sire, with Championship runs in the Open Classic Challenge, Open Classic Challenge John Deere, and the Derby Unlimited Am followed by a Reserve Championship in the Open Classic Challenge John Deere. A few of his 2015 stats are, Leading 3, 4 and 5 years old Cutting Sire and Top Junior Cutting Sire. With sire earnings of $7,882,790 giving him an average of $3,503,462 per year. We are humbly grateful to own this guy we affectionately call Denver.

Metallic Cat made his debut on the Equi- Stat Junior Stallion Statistics Cutting chart at No.16 following the 2013 season. He jumped from No. 3 last year to the top spot after his offspring won more than $6 million in cutting pens across the country. The 2005 stallion (High Brow Cat x Chers Shadow

x Peptoboonsmal) was bred by The Roan Rangers, of Weatherford, Texas, and boasts 239 money-earning cutters with average earnings of $25,355.

At the top of Metallic Cat’s offspring list is Meteles Cat, who has a lifetime bank-
roll of $307,724. Meteles Cat was bred by Rock Hedlund, of Acampo, California,
and is owned by his son Cody Hedlund, of Weatherford, Texas. The father-and-son team showed Meteles Cat to 2015 earnings of $164,511. Meteles Cat’s long list of wins includes the Breeder’s Invitational 5/6-Year- Old Non-Pro and the Western Bloodstock/ National Cutting Horse Association (NCHA) Showdown In Cowtown Non-Pro.

Metallic Cat, who is owned by Alvin and Becky Fults, of Amarillo, Texas, currently sits at the top of the reined cow horse junior stallion chart, as well. He has total offspring earnings in excess of $7.25 million. 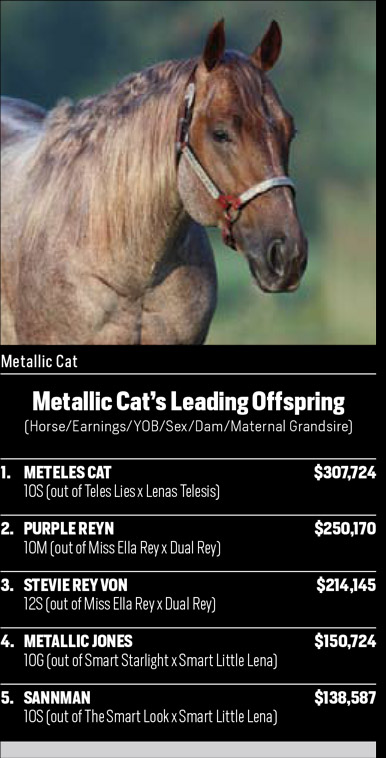 Metallic Cat is a household name in the cutting industry, and his influence is con- tinuing in the reined cow horse pen. Metallic Cat’s first foals hit the show pen in 2013, and by the end of 2014, he was third on the Equi- Stat Junior Stallion Statistics Reined Cow Horse chart. By the end of 2015, he climbed to the top of that list.

The 2005 stallion (High Brow Cat x Chers Shadow x Peptoboonsmal), bred by The Roan Rangers, of Weatherford, Texas, and owned by Alvin and Becky Fults, of Amarillo, Texas, was ridden by Equi-Stat Elite $2 Million Rider Beau Galyean to cutting earnings of $637,711 in less than a year of competition.

The 2008 National Cutting Horse Association (NCHA) Futurity Open Champion had a total of 22 reined cow horse money-earners to his credit in 2015, which has more than doubled from the 2014 sea- son. His reined cow horse performers have won a total of $344,130 for average earnings of $15,642.