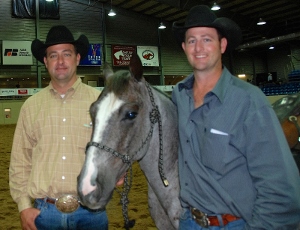 Metallika, a gelding with $8,001 in prior cutting earnings before heading to the Breeder’s Invitational (BI) in Tulsa, Okla., returned to Texas with more than $92,000 earned and as the BI Derby Open Champion for his owner Scotty Rice, after marking a 225 in Saturday’s finals with his trainer and Scotty’s brother, Tag.

While securing the Derby Open title and about $68,000, including a 10 percent fee actually split between his sire and his dam’s owners, Metallika also earned $10,000 as the BI’s Derby Open Sales Incentive Champion. Two days before topping the Derby Open finals, the horse and Tag Rice earned another $6,764 by tying for fifth place during the May 22 BI Derby Open $10,000 Novice finals.

Scotty is 37, lives in Weatherford, Texas, and owns a Fort Worth, Texas, Internet access provider. He had planned to ride Metallika in the Non-Pro at the BI, too. Scotty switched horses, though, after Tag, who is 39, and Metallika posted 219 and 220 scores in the first two Open rounds. Scotty and Super Smart Rey earned about $9,000 by tying for ninth in Saturday’s Derby Non-Pro finals.

This is the first time that Tag has won a big limited-age title riding one of his brother’s horses. Scotty had earned a prior title riding a horse trained by Tag. Scotty left cutting for a while to concentrate on building a business he started with horse earnings. “He got out of it [riding cutting horses] for a few years and he just got back in it last year,” Tag said. “It’s been great having him around. We are best friends.”