In June of last year, his offspring collectively earned $1 million in the cutting pen. Then, six months later, at the conclusion of the 2014 NCHA Futurity, his offspring totals jumped to $2 million. And 90 days later, his progeny reached the $3 million mark, officially at $3,092,113. All three milestones were NCHA records, making Metallic Cat the fastest sire to do so in NCHA history.

Metallic Cat was also the talk of the 2014 NCHA Futurity. He had 45 money earners out of 80 offspring entered in the event, giving him an average of $14,682. Metallic Cat also led the list of most offspring entered in the Futurity, which was only his second foal crop. Metallic Cat jumped to the top of the 2014 NCHA Futurity sire list when his 3-year-old offspring posted total earnings of $660,690. He led other sires High Brow Cat, Dual Rey and Smooth As A Cat, which came in second, third and fourth, respectively.

The impressive red roan stallion, sired by High Brow Cat and out of Chers Shadow by Peptoboonsmal, is owned by Alvin and Becky Fults of Amarillo, Texas. He was trained and shown by Beau Galyean to the 2008 NCHA Futurity Open title and currently is NCHA’s second highest money earning stallion, with $637,771 to his name. Entered in 12 events during his show career, he made the finals all 12 times and never lost a cow. He was retired to stud at the end of his 4-year-old year. He was also the 2009 NCHA Horse of the Year and is in the NCHA Hall of Fame.

Metallic Cat got a huge vote of confidence with another record at the NCHA Futurity. One of his 2-year-olds, an eye-catching chestnut colt by the name of Eight Mile, topped the sale at $400,000, while another, Moses Man, a sorrel colt, was third highest seller at $210,000.

The story of the Fults’ coming to own Metallic Cat is nearly as amazing as his show and sire records. Alvin didn’t buy him until August of his 3-year-old year. That was just three months before he first walked to the herd at the NCHA Futurity. At the time he was owned by Beau and Ashley Galyean, Alvin’s resident trainer, who had purchased him as a started 2-year-old, and worked him for a year on the Fults’ place in the Panhandle. Beau used his truck as collateral to buy the up and coming stallion in the beginning and when the majority of the money came due, he sold the horse to Alvin to cover the note.

“I bought the horse for myself,” Alvin related. “He was going to be my Non Pro horse at the Futurity. We decided to let Beau show him in the Open and hoped he would make it to the semifinals.”

When Metallic Cat qualified for the semi’s, Alvin withdrew from Non Pro competition. The stallion went on to electrify the crowd with a winning run of 222. “The louder the crowd got, the lower the horse went,” Alvin said.

“You know, when we showed Metallic Cat at the pre works, people told me to put him with an experienced trainer for the Futurity. Beau had just turned in his Non Pro card, and they thought maybe he didn’t have the experience to handle a horse like Metallic Cat. Well, I had watched Beau and that stallion for a year before I bought him and I knew I had the right rider with the right horse.”

Today, Metallic Cat enjoys the life of a well cared for stallion. He’s quietly ridden three days a week around the ranch with a loose rein and no spurs.

“I’ll ride him to check cattle or into the wheat fields,” Alvin revealed. “Sometimes I’ll turnback on him when we’re working horses. There will never be any pressure on him again. He’s earned his easy life.”

When not in his stall, Metallic Cat enjoys a large turnout with full view of several mares. Typical of a young stallion, he calls out and prances and generally draws attention to himself, the way Alvin wants it to be.

“Becky and I feel blessed to own a horse like Metallic Cat,” he said. “Besides owning the one of the next generation of great performance horse sires, his show and performance records allow us to give back to the industry by donating breedings to Horsemen For Christ and the NCHA Youth Cuttings and to the Colorado State University and Texas A&M auction and research programs. He’s a special horse and we enjoy every moment owning him.”

Metallic Cat was the Top Sire of the 2015 NCHA Super Stakes earning $553,926 in sire earnings during the show. His numbers placed him $145,938 over the second highest money earning sire, bringing Metallic Cat’s total sire earnings to $3,600,311. Yes we’re in shock and total amazement at the success Denver’s babies are having in the show pen! We once again would like to thank all the mare owners for believing in Metallic Cat and all the trainers for doing what they do best, without you none of this would be possible. We cannot wait to see what the future might hold for our guy. Truly Blessed!

Wright On For Stars Freckled Girl

Wes Ashlock, aboard Gone Are The Times, by One Time Pepto, and Fons De Barbanson on Wild Starz, by Wilds My Thing, tied with the second-highest score of 216 points. Gone Are The Times and Wild Starz are owned by John and Jana Thacker and Nachos QHs, respectively.

Shut out by a renegade cow earlier in the Finals on High On Smarts, also owned by the Cliftons, Wright put his trust in his helpers and Stars Freckled Girl for the eleventh hour win, his first in Will Rogers Coliseum.

“We bought her from Phil Hanson last July, after the Derby,” said Wright. “They did a fabulous job with her. She was cutting when we bought her and we’ve just tried to keep her cutting.”

“I was a golfer and a friend introduced me to cutting horses,” said Clifton, a trucking company owner with ties to the oil industry. “My handicaps went from a 10 back to a 15, and the next thing I knew, I had about twenty head of horses and babies.”

Stars Freckled Girl, bred by Phil and Leah Hanson, is by Metallic Cat out of Badge To The Bone, a Freckles Playboy daughter with unique connections to the NCHA Futurity and the NCHA World Championships.

Badge To The Bone is out of Badge Of Courage, by Peppy San Badger. Bred by S.J. Agnew out of the Doc Bar daughter Tenino Fair, Badge of Courage was a full sister to Little Tenina $385,822, and three-quarter sister to Tenino San $144,658. Little Tenina was champion of the 1991 NCHA Futurity and 1992 NCHA Derby under Greg Welch, and Tenino San won the 1982 NCHA World Championship, also under Welch.

Wright began his career in California as a reined cowhorse trainer, before he switched to cutting. In 1992, he was reserve champion of the PCCHA Futurity aboard Lakotah Warrior, then won the championship in 1993 aboard Whisper Ofa Playgirl. After that, he struggled to stay competitive.

“I got strung out on dope – meth and crack,” said Wright, matter-of-factly. “But Shannon Hall and his family had a big play in getting me straight. After I went to rehab, I went to work for Shannon for two and a half years, and Shannon got me the job working for Linc.” 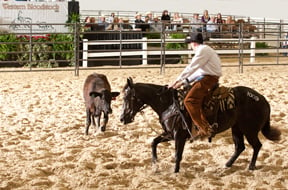 Purrfect Playgirl was the high-selling 4-year-old at $25,500. The High Brow Cat daughter, in training with Bill Riddle, was consigned by Glenn Drake, Napa, Calif., and sold to Juan Carlos Rengel Leon, Valencia, Venezuela.

Smart Metallic RG, at $22,000, was the high-selling stallion. The 4-year-old Metallic Cat son, in training with T.J. Good, was consigned by Mariposa Farms and purchased by Billy Gene Crenshaw, Kountze, Tex.

The NCHA Summer Spectacular Sale, August 1 at Will Rogers Equestrian Center in Fort Worth, is the next sale on Western Bloodstock Ltd.’s agenda, followed by the Center Ranch Production Sale, in Centerville, Tex. on October 10, and the NCHA Futurity Sales in Fort Worth, in December.

NRCHA Stallion Stakes – Wrap up. In the Open Finals, Call Me Mitch shown by Phillip Ralls owned by Estelle Roitblat took 3rd. In the Intermediate Open Finals, Cashs Catmando shown by Trent Pedersen owned by Hope Miller finished up 12th. Moving on to the Non Pro, Annies Smarty Cat shown by Marjie Robinson owned by Ted Robinson Took 6th in the Non Pro Finals, 5th in the Intermediate Non Pro Finals and took 4th in the Novice Non Pro Finals. What an exciting finals, so glad we had the opportunity to be in Vegas and cheer from the stands for our team members . . . Hope to see you all at the next one, keep up the great work 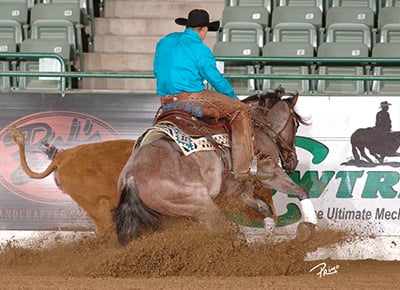 Twenty-two Open contestants will advance to the clean-slate Stakes finals on Friday and Saturday. It took a 647.5 score and above to make the Open finals, and the high score of the preliminaries, a 659 (222 herd/218 rein/219 cow) belonged to Call Me Mitch (Metallic Cat x Miss Hickory Hill x Docs Hickory), shown by Paso Robles, California, professional Phillip Ralls.
Ralls and the 2011 stallion, owned by Estelle Roitblat, won the herd work go-round on their way to the finals.